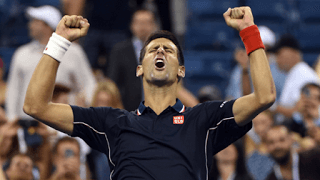 We have a very interesting match-up in this US Open Semifinal. For Novak, this will be an 8th
consecutive semifinal at the US Open. He has won just 1 title at Flushing Meadows in 2011. The world number 1 has been very impressive in his 5 matches at the Open so far, although he has met some serious opposition. He beat Schwartzman, Mathieu, Querrey and Kohlschreiber all in straight sets. His first real obstacle was Andy Murray in the quarterfinals. Djokovic dropped one set in a tiebreak, but eventually won it in 4.

Against the experience of Djokovic we have the youth – Kei Nishikori in his first Grand Slam semifinal appearance. He became the first Japanese player since Ichiya Kumagae in 1918 to make it this far in a major. His path to this stage was not as easy as Djokovic’s. The Japanese had easy wins against Odesnik, Andujar and Mayer in the first 3 rounds. Then he faced Milos Raonic in a battle between the young talents on the tour and won in 5 sets. In the quarterfinal, Nishikori had to play another marathon against the Australian Open champion Wawrinka. This match went over 4 hours of play again and Nishikori won it 3-2. This was quite unexpected, considering Nishikori’s appearance at the US Open was in doubt before the start of the tournament due to a toe injury.

Nishikori had a day to recover, but still his last two matches were quite exhausting. He relies on great footwork and movement around the court, but his opponent Djokovic is also great at this. The Serb has been serving very well, maintaining a high first serve percentage and winning most of his points on it. I think that Nishikori has a much harder task than his last two. Djokovic’s experience will prevail in my opinion, so I am backing him with a -6,5 handicap at 1.83 @